Players’ Reactions After the Event

Although not without its hiccups, the inaugural Global Poker Masters was voted a successful first foray into sportified, team based poker by the competition’s legion of fans, the poker media and – perhaps most importantly for its sustainability – the participating players themselves. The players’ enthusiasm was highlighted by a genuine willingness to be a part of the event itself and give constructive feedback not simply on just what makes the Global Poker Masters unique, but what they didn’t like and how to make the event better in 2016.

The Role Skill & Strategy in the GPM versus conventional Poker tournaments

With the normal qualifiers out of the way (the level of variance in poker, the impossibility of defining a “best” team out of the eight national teams in contention through a single 2 day event and etc.), players tended to appreciate the diverse nature of the step by step structure albeit noting that levels were a bit fast.

The Masters’ structure also created novel strategic situations that Team Ukraine’s Eugene Katchalov noted made teams huddle together to decide on optimal playing styles in order to adapt. This was most pronounced in The Playoffs due to the hard stop as well as the unique, top heavy point structure for each sit and go – a point made by Italy’s Rocco Palumbo.

Structural changes as the event progressed from the Playoffs through to the Quarterfinals, Semifinals and Finals also shook up normal playing dynamics as Teams really needed to function as a team in order to give themselves the best shot at moving through, choosing the best players to play through the competition’s heads up (Quarterfinals) and 6-max (Semifinals) portions.

As a whole the value of well drawn out strategy became apparent within the competition as Team huddles and off-time discussions during breaks and before/ after play became the norm.

King Mustapha: Kanit leads Italy to a 3-0 win over Russia

#TeamItaly to be celebrated at WPT National Venice 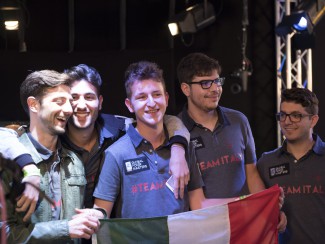